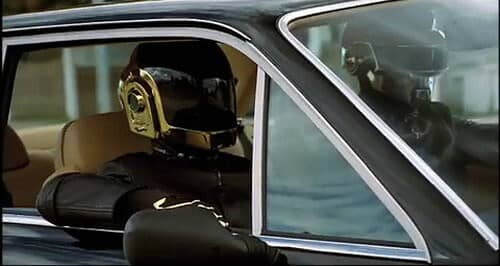 Looking back, a huge part of why I love classic cars has to do with the impact of seeing stylish rides in movies.

As a result I’ve always wanted to pay homage to my favorite cars in films with a series for the blog.

That being said, this post marks the first of a series of posts I’ll be doing on some of the most memorable cars in the movies.

To that end I’m starting off with one of my favorites, a true diamond in the rough.

A vehicle that I had no idea would evoke so much emotion in these stark circumstances.

I was so caught off guard by the minimalistic little gem of a science fiction film that it appeared in.

Daft Punk’s Electroma, which was made in 2006 and directed by the French electronic music duo Daft Punk (the band members, played by Peter Hurteau and Michael Reich).

The story revolves around the quest of two robots who have a desire to become human; a form of self-expression you might say.

However, their quest utterly fails, with a society that surrounds them with their cruel intentions which leads to shock, acceptance, and ultimately the robot’s demise.

The film opens with a variety of still views of what seems to be cliff dwellings that have eroded over centuries.

The first thing I notice is how long they held the shots, and I must admit, I started to get nervous.

I’ve seen plenty of art films and was warned that there is absolutely no dialogue and no emotion – just robots doing their thing.

But then roughly two minutes into the film stood this impeccable glossy black coupe, stripped of any identifiable badges, just sitting there.

Moments later it was being entered by two robots, one with a chrome shape batters helmet; and the other, a gold phallus with a black onyx dome.

The second I saw the door handle I thought this is an Alfa Romeo, but no something more – much, much more.

The lustful obsession grew with every moment, and the next thing you know, you’re in the back seat.

You are being surrounded by creamy buttercup leather, looking out at a clear sunny desert sky, cruising at a good clip down the landscape.

The long silence is broken ever so slightly by a strange hum, which begins ever so softly.

You are introduced the open road Freedom, but my anxiety started to ratchet up a notch, and I braced myself for some kind of Kubrick/Lynch scenario – but nothing came.

Various continued shots of the car moving down the highway, and over time, the hum becomes louder and more ominous until this chaotic burst of synthesized thunder erupts.

Now I’ve never had that love at first sight with any car, it’s always been over time that I fall in love with a particular vehicle, but this car got to me.

The sun dancing off the door and rear quarter panel as it was floating by the blurred landscape.

And when it the perfect interlude into Todd Rundgren’s “International Feel” song began to play, I was smitten.

I felt a sense of hope and began to listen to the words searching for some hidden meaning something to give me a clue to what is to come.

“Here we are again, the start of the end,

There is more, International Feel

I was experiencing the hopeful ambition of these two machines I knew that familiar feeling of being inside a sexy car heading to the promised destination. The film is worth viewing.

The 412 was the most sophisticated and luxurious model with a 5.0-liter V12 engine producing 340 hp.

Ferrari made 576 examples of the 412, making it one of the very rare models in existence.