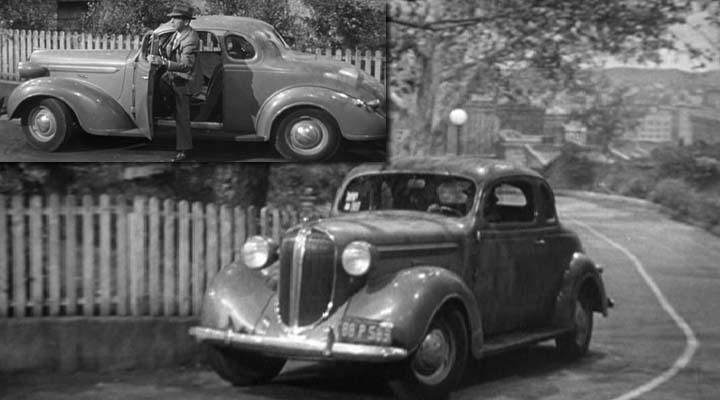 This month’s post in my “Iconic Cars of Cinema” series is none other than the 1938 Plymouth Deluxe Coupe from The Big Sleep.

This Film Noir classic directed by Howard Hawks was the first film version of the 1939 novel of the same name by Raymond Chandler.

The story is all about how these two navigate the seedier side of Los Angeles in the 1930s.

The film itself is confusing and difficult to follow, as they had to work their way around such taboo subjects as pornography and homosexuality, etc.

It was originally finished in 1945 but was shelved by Warner brothers for another year, which is a whole other story I won’t get into.

The re-shot, re-edited, and revised The Big Sleep was finally released on the 23rd of August 1946.

The cinematic release of The Big Sleep is regarded as one of the more successful Noir films of its time.

This black and white film is one of my favorites. Wickedly clever, dripping with sexual innuendos, funny at times with quick hard-boiled lines.

And of course, to see Bogart and Bacall (only their second film together) go at it on-screen is nothing less than cinematic perfection.

Chandler’s dialogue with the help of Brackett, Furthman, and Faulkner screenwriting makes this Noir film go down in Legend history.

The Plymouth’s first appearance is when Marlowe drives up to through the hills.

It’s cold, dark, and raining like cats and dogs – we know he is trailing The blackmailer Gieger due to the headlights being not illuminated.

The Plymouth is slicked with rain, and the house is located on the corner of Crest Drive and Laverne Terrace.

The moment he stops the car and pulls the emergency brake, he crouches down in time to see another fancier convertible Plymouth pass him, only to pull into the driveway of the original tailer.

Marlowe jumps out, puts on his trench coat, and walks over to the 39 Plymouth.

He opens the door to check the registration (which is Carmen Sternwoods’ ride) before he saunters back to his Plymouth to hunker down for the late-night stakeout.

To keep him company are his trusty chesterfield cigarettes. This is not the first time we see Bogart in a Plymouth.

In one of his earlier heist films High Sierra, he drives a 38 Plymouth Deluxe coupe.

I’d kind of like to think Bogart had a preference for Plymouth’s, the salt of the earth, no pretentions here as your everyday shamus driver.

Among the notable items was the secret revolver compartment as well as the windshield sticker “B”, located on the lower ride side.

During the war era, commodities including fuel were rationed – the “B” sticker allowed only 8 gallons per week.

Can you imagine that? That’s hardly enough to get around town let alone get anything done!

However, if you were truly undercover, it would be a dead giveaway that you were a copper given that it was common knowledge.

The real reason why I choose this particular car is because of a single scene that takes place inside the Plymouth 2/3rds of the way into the film.

Bogart offers to give Bacall a ride home in the Plymouth. From the tone of their conversation, it’s clear where things are headed.

At the decisive moment, Bogart kisses Bacall (and she is on board with the romance).

But more importantly, he finds out the truth about what’s really going on between the two of them.

I couldn’t help reflect back on important conversations I’ve had with friends, family, and lovers – while inside of a moving vehicle.

In that context, the car becomes a kind of moving truth chamber, inspiring intimacy that otherwise might not occur.

It provides quite a contrast with this day and age, where the truest intimate conversations are lost in the swift pace of technology.

This Plymouth was not considered a cool car back in 1938, not my any stretch of the imagination.

It was a milder version of the ’37 coupe, but people, including the dealers, were not happy with this car.

It was pudgy, the grill bloated, together with short headlamps that would protrude like bug eyes mounted high on the sides of the radiator shell.

But you wouldn’t know this Bogart behind the wheel, which made it as cool as can be and an ideal candidate for this series on iconic classic cars.