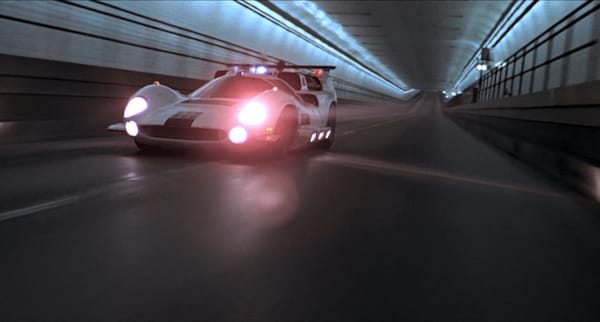 This month’s film is sort of hard to watch. In fact, it’s actually my least favorite off any film I’ve previously covered.

That having been said, the uncertain times we find ourselves in make such a film worth discussing.

The fact that this film features iconic cars like the Lola T70 race car makes this discussion a little easier to have.

The film I dread discussing is THX 1138. THX 1138 was George Lucas’ first film, made in 1969 and released two years later, the same year my kid sister was born.

Lucas brought on his friend Francis Ford Coppola to produce the film while Lucas would direct.

American Zoetrope and Warner Bros were also involved in this thought-provoking film that still manages to remain relevant in these trying times.

THX 1138 is set in the far future, where humans toil away in service to chrome-faced robots who wear nothing more than leather jumpsuits and helmets.

We even see that the humans are all shaved bald and only allowed a white smock for clothing.

This is a very utilitarian society that affords its members no means of creativity, individuality nor any emotional or sexual outlet.

In fact, the only thing keeping the humans from revolting is a pharmacy’s worth of narcotics to keep them content.

All of this dehumanization is exactly what the robots want. Since the robots only desire optimal productivity, things like emotions just get in the way.

As to what the robots enslave humanity to produce, they use the human to make more robots.

Thus we have a world where humans endure endless toil to add more and more entities to the dominant force in the lives of humans like the titular THX 1138, played by Robert Duvall. 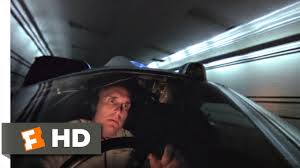 Duvall’s character has been rethinking his future with Magge McOmie’s LUH 3417, he decides to flee his circumstances.

He then runs into the suspicious duo of Donald Pleasence’s SEN 5241 and Don Pedro Colley’s hologram entity SRT 5752.

While THX 1138 and SRT 5752 flee on a pair of stolen iconic cars, specifically Lola T70s, SRT 5752 crashes his car into a pillar of concrete during his first time driving the vehicle.

Now on the run from robotic law enforcement, which are in nothing that even approaches the class of iconic cars like the Lola T70, THX changes course to escape the borders of the robot city.

After eventually discovering a ventilation shaft and seeing it as a true escape path, Central Command orders the pair of police robots to call off their pursuit.

CC’s reason for ending the reclamation efforts are strictly financial: capturing THX would cost more than an acceptable amount of money to carry out.

As the robots are still within speaking range, they caution THX that while the shaft will take him to the surface, the surface is not suitable for any living creature.

Choosing to take his chances in the wilderness, THX ignores the advice and continues his path through the air shaft.

THX eventually makes it to the surface, discovering that the robotic city happens to be entirely underground.

The first thing THX encounters upon surfacing is a sunset, followed by the glimpse of a living bird flying off in the distance that hints at how life can survive topside.

Considering just how gorgeous a vehicle like the Lola T70 is, it seems hilarious that their natural beauty would be uglied up with a bunch of kibble and junk to sell the illusion of being set in the future.

That said, the Lola T70 was considered a junk car by 1969 and Lucas was able to score these cars for a steal.

The most amazing thing to me about these particular Lolas would be their noise. Lolas used an American V8 engine but Lucas decided to use the audio of an F86 Sabre Fighter jets making a landing. 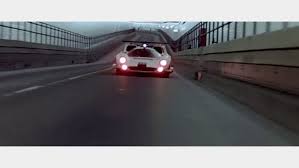 Another important factor to this sound would be the fact that Lucas filmed them within the San Francisco Tunnels.

Because the only way to get a closed shoot would be to film at night, the sound would be amplified by the natural acoustics of the tunnel, helping to sell the idea of a car that sounds like a spaceship.

The Lola T70 was a sports car developed by Lola Cars, a British company, in 1965. Lola built the chassis, which was usually powered by the previously mentioned American V8.

Lola T70’s remained a popular example of iconic cars until the late 1960s, with over a hundred examples existing in three varieties:

The Lola T70 was eventually replaced by the Lola T160, part of the Can-Am series.